Four emerging T-Port filmmakers will soon embark on their journey to the 2021 Cannes Film Festival with their short films. Varying in genre, style, subject matter and country – the films represent a specific moment in film history, as in the world in general.

We had a chance to talk with the young auteurs right before they board their flights to the world’s most famous film event, to hear about their journeys, artistic visions and future plans. Two of those talks are available below, with two more coming soon. Beasts Among Us and If It Ain’t Broke will be available on T-Port after their Cannes premiere.

Natalia Durszewicz ✶ Beasts Among Us

Natalia’s animated short film, “Beasts Among Us”, was selected for the Cinéfondation Selection. It is a surreal tale of role reversals. In this uncanny visual world, victims become predators and vice versa. It shows the world we live in from the perspective of the most vulnerable. It was selected for the

➤ I was born in 1995 in Bydgoszcz, Poland. I have graduated from the Leon Wyczolkowski Secondary Art School and received the Graphic Artist’s Diploma in 2015. Currently, I’m a student of Animated Film and Special Effects at the Polish National Film School in Lodz.

“Beasts among us” is my 4th animated short film, and I am currently working on my graduation film, “Unusually long sunset”.

When I’m not working on my film projects I like to create illustrations and paintings.

➤ “Beasts among us” is a film in which you can find many meanings. The basis of the story, my first concept, was to reverse the roles of animals and humans, which alludes to the cruel treatment of animals, the exploitation of the natural environment beyond measure, and violating the rights of living creatures for profit. I wanted to show the human greed and insatiability throughout this process. However, under this layer, there are also others, more related to interpersonal relationships, of how people treat each other when some individuals are ready to eliminate each other in order to reach their ultimate goal.

For inspiration, while making my short animations I mainly use my passion for painting and film. Everything I have ever seen or read still affects me somewhere in my imagination and I translate it using my own artistic language and unique way of storytelling.

It was the same with “Beasts among us”. In my filmmaking process, the story unfolds as I create new shots. In an animated film, you can allow yourself a little freedom and use the power of your imagination to the maximum, scene by scene. That’s why I like working on animated films so much, because there aren’t so many limits in the process, except, of course, time limits. “Beasts among us” is my 4th short animated film made at the Lodz Film School under the artistic supervision of Mariusz Wilczynski and Joanna Jasinska-Koronkiewicz.

➤ To be honest, I can’t even decide which one of the great directors is my favourite. I love a lot of films, I grew up watching polish classics directed for example by Andrzej Wajda, Roman Polanski, Krzysztof Kieslowski or Andrzej Zuławski and it still has a big impact on me. But recently I watch a lot of short films during films festivals and it inspires me a lot.

➤ My dream is to be able to continue and create my films.

Elinor Nechemya is an independent filmmaker based in Israel. Her short film, “If It Ain’t Broke”, will be screened at La Semaine de la Critique- Cannes. The film follows two young women wandering through the city of Haifa, One is escaping her life, the other her future.

➤ I was born in Jerusalem in 1984. I’m a director and writer based in Tel-Aviv. My previous short films “OUR HEARTS BEAT LIKE WAR” (2020) and “EVERLASTING MOM” (2017) both premiered at the Toronto International Film Festival. Other films I made were screened at internationally acclaimed festivals such as Locarno, Sarajevo, and Palm Springs. I am also an alumna of the Berlinale Script Station and the Locarno Filmmakers Academy.

I’m currently working on my debut feature film, “ISLAND”, featured in the 2021 Sam Spiegel International Film Lab and developed with the support of the Israeli Film Fund and The New Fund for Cinema and Television (NFCT). The project will participate in the 2021 Festival de Cannes Focus COPRO’ pitching program at the SFC. We hope to shoot the film in December 2022. 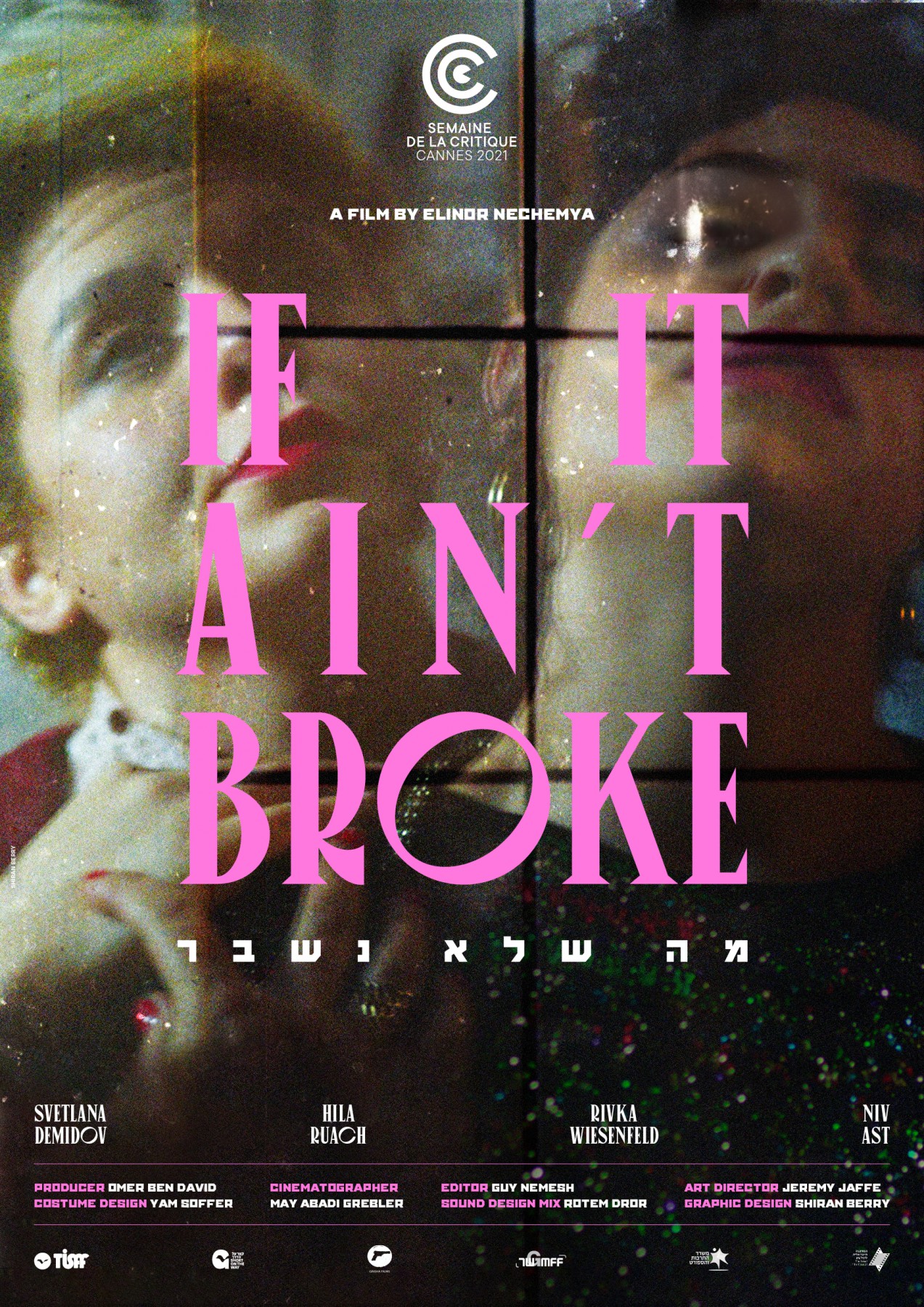 ➤ “IF IT AIN’T BROKE” is a sensual and intimate portrait of female friendship in the encounter with motherhood and the emergence of a new passion. The film deals with the change of perspective and the everlasting feminine conflict between the role of mother and everything else. My intention was to portray female friendship as I experience it; to capture the intimacy with someone who is terribly close.

The first choice I made was to cast my best friend, Rivka Wiesenfeld, who plays Hagar in the film. Rivka is a non-actress, same as Hila Ruach, who plays Alona. For Alona’s role, I wanted a performer – of any kind. I ended up casting Hila, who’s an indie rock musician. Local Israeli music critics call her the “indie princess”. I liked the idea of slowly “cracking” her strong image throughout the film, and then revealing her as a mother of two (spoiler alert, I guess).

I like working with non-actors because I know that beyond the risk there’s a promise of a unique and specific character. I wanted real and unforgettable women.

The next thing was to keep the spectator ignorant of the fact that Alona is a mother until the closing sequence of the film. It was important for me that she’d be “just” Alona, just herself and not A MOTHER. I wanted the viewers to be fully engaged in her attempt at escapism, I liked the idea of reading the film backwards and in retrospect.

I’ve set the film in Haifa which is a port city. I liked the sentiment of it, the mixed culture there and the bilingual streets. To get the intimate atmosphere I chose a wintery setup, but of course, it’s Israel and the winter just didn’t arrive, it was actually boiling hot during the shoot.

The script promised an emotional rollercoaster, and was full of disrupted tempos and mood swings. Along with my cinematographer and art director we designed each scene as a struggle between the cold and the warm palettes, between the interior and the exterior. We wanted to get an aesthetic of tension that would layer the familiarity of the characters. I think these are the elements that emphasis the existential pain and longing of the two, which live in perfect harmony with their joyful temper and excessive chatter.

➤ Kelly Reichardt. She’s persistent, creative, exploding with talent and one of the pioneers of the female gaze in contemporary cinema.

➤ To make movies and to get rich from making movies.