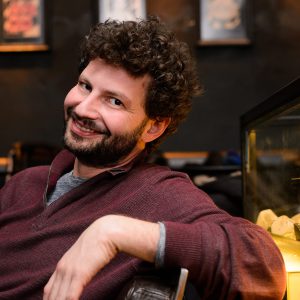 Born in Odessa Ukraine to a Refusenik family (Soviet Jews, who were denied permission to emigrate) who after many years of hardship from the Soviet authorities moved to Israel in 1987. Emanuel was raised in a Jewish orthodox home and graduated from yeshiva. After the army he became secular and together with his older brother he funded Metaphor, a production company which produced Film, Television and a varity of various projects for a verity of leading companies in Israel and worldwide. After a decade in production, and with several internationally successful films, Emanuel graduated from Sapir the School of Audio and Visual Arts and started directing.

Second life was a short in the sci-fi genera and made a fair tour on several Sci-fi & Comic-Con film festivals. Emanuel is currently working on his first feature film.

From my early childhood I was drawn to science fiction novels, a love that has evolved into an obsession to watch all the Sci-Fi films I could get my hands on. From Kubrick’s Space Odyssey to BBC’s Black Mirror, our world has undergone a stupendous change. Ideas like morality, freedom and even humanity – are essentially changing, and cinema has to react to it. In light of the technological leap my generation has witnessed, I realized that the genera of “science fiction” is not relevant any more, and that the films should simply be called “science”. Because our technological future is no longer a question of if, but a question of when. In my humble opinion, the question of humanities alienation will be the most important question of our generation. Will the technology bring people closer or push them farther away?

Alienation in cinema is hard on the viewer and even harder to portray, so to try and communicate with viewer more meaningfully I tried to find the golden road between empathy and apathy.  So I chose to portray a world where technology has become the modern Babylon Tower and the physical reality is abandoned for a virtual one. By this I’m trying to engage the question – if in a world worshiping technology that gives back true happiness although imagined, will we be willing to sacrifice our most fundamental human connection.

Second Life is a VR Metaverse. To deal with growing shortage in storage, human interaction is minimized, and speech is outlawed. An experienced upload technician teaches a young technician to speak, and in an empty world flickers a spark of humanity.