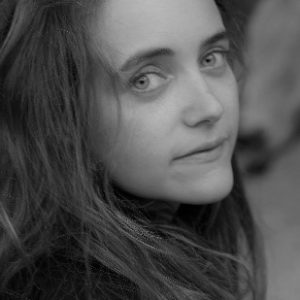 Shira Sznaider was born in 1994 and grew up alternately between Israel and Germany. In 2020, she graduated from the Steve Tisch School for Film and Television in Tel-Aviv University, during her studies she wrote and directed six short films, which have been screened and awarded in international film festivals.

Her diploma film, “Sonya”, was a co-production with the Warsaw Film School. In 2019, she attended the lab “Produire au Sud” with a screenplay for the feature film “Sonya”, a developed script of her diploma film.

In 2021-2022 she participated the script development lab of the new Israeli film fund for first-feature female creators with her screenplay “Layover”.

Lady in a World of SOBs