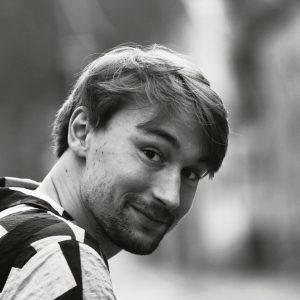 MICHAEL FETTER NATHANSKY was born in 1993 in Cologne. Since 2013 he has been studying Directing at the Film University Babelsberg KONRAD WOLF. His bachelor film GABI opened the Berlinale section Perspektive Deutsches Kino in 2017 and won the German Short Film Award. He also directed the shorts DIE EINTAGSFLIEGE (2014), CHEWBACCERL (2015), PITTER (2016), 5 WAYS TO CRY (2019), UN CUENTO SIN TÍ (2019) and his debut feature YOU TELL ME (2019). In 2018, he founded the production company Contando Films together with Virginia Martin and Anna-Sophie Philippi.

Gabi is a floor tiler, and Marco is her trainee. Lately, Marco has begun rehearsing with Gabi on how to break up with his girlfriend. Adapting his game to her own everyday life, Gabi tries to find a way to fight the emptiness of her life.