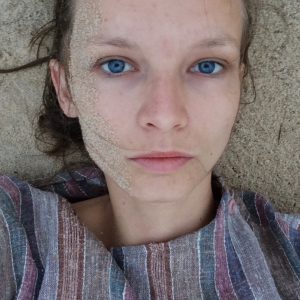 Ania Morawiec is a screenwriter and film director, graduated from The Polish National Film School in Lodz (2020, graduation with honors) and from The Jagiellonian University in Krakow (Political Science Departement); scholarship holder of the Freie Universitaet in Berlin; she wrote a thesis about connections between Carl Gustav Jung’s idea of collective unconscious and works of Andrzej Żuławski; in 2020 she finished her diploma short fiction Fading snow; regular columnist of Pismo – a monthy socio-cultural magazine.

She’s an author of many short fictions and documentaries (It would be beautiful and Planet Earth among others); co-writer of the full-lenght documentary JENNY (film in production).

From 2009-2014 she worked in a famous community radio station “radiofonia” based in Kraków, Poland, where she had been leading her own cultural radio show; she’s also a film educator working for the Filmforum Assosiation and the Andrzej Wajda’s Film Center in Warsaw.

In 2018 she received a scholarship from the CineNomadSchool Programme (cooperation of film schools from Benin, Nigeria, Poland, France and Burkina-Faso) in frames of which she wrote and directed a short fiction BATURE in Nigeria. In 2021 she has received an artistic scholarship funded by the President of Warsaw.

When a heart breaks into pieces, the gap spreads along the weakest parts of the world. ‘Fading Snow’ presents one night from the life of 35-year-old Mania who leaves her place and sets off to find her way back to home in a broken city of Warsaw.