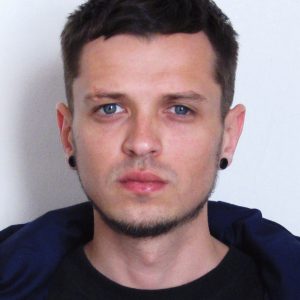 Sasha Stelchenko is a recent BA graduate in film directing at FAMU where he is currently doing his master’s degree. Before moving to Prague he successfully completed his undergraduate studies at language college in Minsk, his hometown, and visual culture studies at EHU, Belarusian university in exile in Vilnius.

Within four years he directed three short films that have been produced and shot in Czech Republic and Ukraine and screened internationally. His bachelor short film Deserter premiered in the official selection of Festival Premiers Plans d’Angers, had its North American premiere at Palm Springs International ShortFest and was nominated for the Czech Lion Magnesia Award for the Best Student Film.

His long-lasting interest in socio-political processes in Belarus leads him now to develop his debut feature that will tackle the issues specific to this secluded and largely underexposed society.

During a late winter evening the police visit Nikolaj and Irina at their home. Their son Sergej is reported missing in action in Eastern Ukraine. Nikolaj begins to suspect that he has deserted.

Send me an Angel // Sapir College