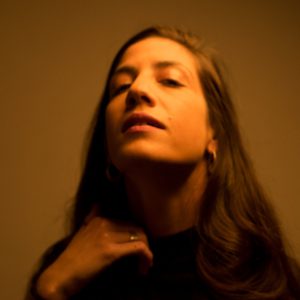 Sivan Noam Shimon is an Israeli actress, screenwriter, and director. For her leading role in the film “Blush” (2016, Michal Vinick), Shimon won the best actress award at the Haifa International Film Festival. The film premiered at San Sebastian Film Festival, screened in over sixty film festivals around the world, and won in Outview Greece, Le Palmares Geneva, MILGFF Italy, and Chéries-Chéris France. The film is now available on Netflix and Amazon.

Shimon’s screenplay, the feature film “Afrit”, is now in pre-production, having received a full production grant from the Rabinovich film foundation. Shimon teaches screenwriting at the Steve Tisch School of Film and Television in Tel Aviv University, where she is a graduate with a BA in screenwriting and an MA in directing. As a student, Shimon wrote and directed the short film “Wake Up Call”, which won honorable mentions at The Tel Aviv International Student Film Festival, and screened at international film festivals such as Mix Mexico, TIQSFF Taiwan, Out Film CT, Long Beach LGBTQ Film Festival and OWTFF Toronto.

Lior (20) is an officer at the IDF, that is who she is. One night when Lior is the attending officer, she is forced to choose whether to remain loyal to the system or surrender to her desires.