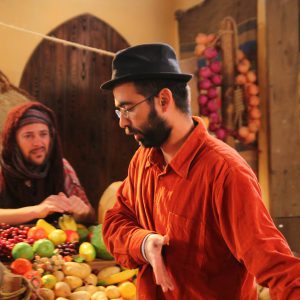 My name is Ofir Dery, 45, born in Beit She’an,
graduate Sam Spiegel (2005), during my studies I directed short docu-films (Skitopolis 17-minute feature
After graduation, I  made a docu-movie called “Happy Seed” 50 min, which Broadcast on TV
I received a Script development for a feature film called “The Teacher for More”, which was presented at the Jerusalem Film Project last year (2020).
In 2019 I won a commendation mark for the short script “The Donkey of Messiah” which won the competition of the Gesher Foundation, Sam Spiegel and Haaretz newspaper. The film participated in the Haifa Film Festival and the Carmel Film Festival
I directed Musical clips, Children’s series for an Internet channel

A man dreams that he is to bring thd Messiah to Jerusalem. The next day he chances upon a white donkey and makes the bold decision to bring it to Jerusalem.

Blessed is the Man

Girl on a Bike