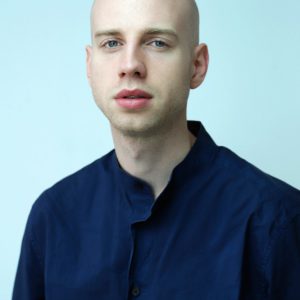 Matus Krajnak is a creative producer and director for films, TV and branded content, graduated from the GERMAN TV & FILM ACADEMY BERLIN, one of the top 15 international film schools. He also trained at the Columbia University School of Arts in New York.

His SEX COMMERCIAL was shortlisted for YOUNG DIRECTOR AWARD in CANNES, his short drama MONOLOGUES premiered at the WARSAW FILM FESTIVAL and his short film REAL MEN won the JURY PRIZE at the 39th Festival of Nations, Austria.

His feature script GUN FUN was second-rounded for the SUNDANCE SCREENWRITERS LAB and placed among the top 15% of entrants to the ACADEMY Nicholl Competition.

He is a DIRECTORS UK Member and a BERLINALE Talent.

My Vision
I want to tell stories that are empowering in redefining queerness; and I want to celebrate broken English, foreign accents and diverse characters on screen.
My Website

A romantic comedy mini-series about the dating experience of a queer vlogger. Milan is a single queer influencer living in London. Through his vlogs, he pulls us into a strange dreamland world full of hook-ups and urban flings.