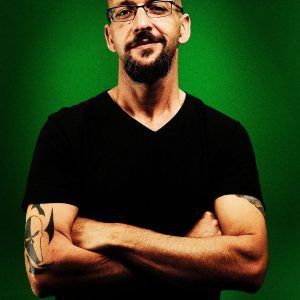 A pioneer of Israeli Genre Films, Eitan Gafny is always looking for a bigger boat, and a new challenge to face.

Born in 1981 to Chilean Parents, he studied film in high school, and later at Tel Aviv University’s film department. A numerous award winning short films (including a 50 minute Romantic Horror Comedy), Eitan moved up to feature films, with Israel’s first ever Zombie film, “Cannon Fodder”, AKA “Battle of the Undead”. After screening the film in over 35 film festivals worldwide, winning 7 awards, and signing a worldwide distribution deal, Eitan decided to take his love for Genre films a step further, and so came “Children of the Fall” – an ambitious throw back to the slasher films of the 1970’s, with strong political and social commentary. Eitan is now working on his future projects, while trying to come to terms with the fact that he will never be a fireman, since films are his one and only passion. And he’s terrified of cockroaches.

On a personal note:
This short film is my most personal project to date.
Shot independently, edited at nights, with an amazing cast and crew of friends who came together to be part of a personal little film that is a small glimpse of something bigger in the future (pun very much intended).
Thank you for watching.

DOWNLOAD PRESSKIT
My Vision
Tell a good story, make the audience think, dazzle them with beautiful images.
My Website

He wakes up in the dark to be tortured by her, until he'll admit he assaulted her; this night will change their lives forever. A short film that is currently being developed into a feature film with the support of the Israel Film Fund.