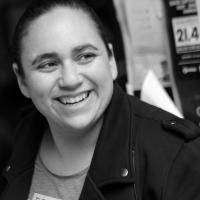 Born and raised in Sha’areiTikva settlement and currently living in Jaffa.

Producing a documentary graduation film, “My friend, Yaniv” that competed in the 2016 IDFA festival, and was featured in the Jerusalem Festival.

Writing and directing a graduation film, “Idolatry“, supported by the Rabinovich foundation.

Naama is confident her partner, who unsuccessfully tries to conceive, wants a dick. When their relationship starts to crumble, Naama goes out to ask a radical and unrealistic solution.