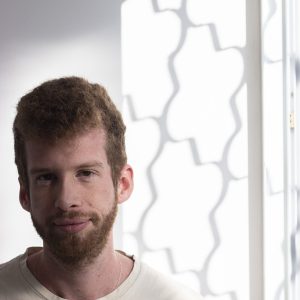 Johnny Doov, a filmmaker, screenwriter, editor and producer, student of cinema in the University of Tel-Aviv.

In the last years, short films “Separated” (Hipardut), “Kiss Me” and “Countdown” written, produced, and directed by Johnny Doov were selected to LGBTQ film festivals around the world. Short film “Bug” (created by Bar Cohen), edited by Johnny Doov, was selected to Haifa International Film Festival.

I Met You On My Way to the Cemetery

Alon is on his way to a funeral in the Kibbutz where he grew up, after his best friend ends her life. On his way up north, he meets a young broken-hearted girl that joins his journey.

Dance of the Houbara