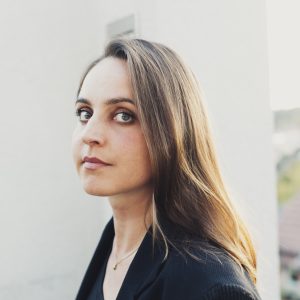 Sabine grew up in a small town in eastern Bavaria, Germany. Alongside jobs in the film industry in Munich and Berlin, she worked at a chocolate factory, the post office, a company for IT consulting, horse auctions and as a waitress.

Currently she is finishing her MA degree in fictional directing. She is developing a Mini Series for F For Freaks and her feature debut PARADISE_bleeding.

A woman attending a funeral, an intimate glimpse into a violent outburst and a smalltown dream gone wrong form an anthology examining forms of guilt, the interconnectedness of blame and origins of remorse behind religion, society and relationships.

Sabine is currently working on her feature debut film: “PARADISE_bleeding”.