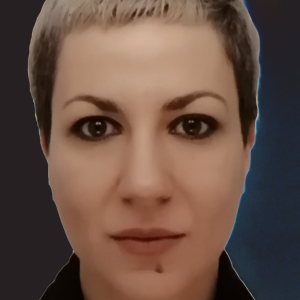 Veneta Androva (born in Sofia) is a visual artist who obtained a degree in History of Art and Philosophy from Humboldt University Berlin and also graduated in Fine Arts from Weißensee Academy of Art Berlin. With her background in experimental documentary filmmaking and photography, in her recent work she is combining diverse media and sources such as archival and documentary material with paintings, all related through animation in simulated environments. She took part in numerous shows in Germany and Bulgaria, as well as Austria, Argentina, Brazil, Poland, Czech Republic and in Israel, where she did part of her study at the Bezalel Academy of Arts and Design in 2016-2017. Androva is also the recipient of several scholarships, such as Mart Stam Scholarship (2015), Artist Scholarship from Cusanuswerk (2016) and was nominated in 2020 for German Short Film Award. Her films have been selected to screen at numerous international film festivals, including: International Leipzig Festival for Documentary and Animated Film, Germany; MONSTRA Lisbon Animated Film Festival, Portugal; FILE Electronic Language International Festival, Brazil; European Media Art Festival (EMAF), Germany; Kassel Documentary Film and Video Festival, Germany.

She is currently based in Berlin.

The young art investor is ecstatic about the meeting. There he hangs, Martin, beautiful, alluring, exciting. It's almost like love. But can the relationship last?