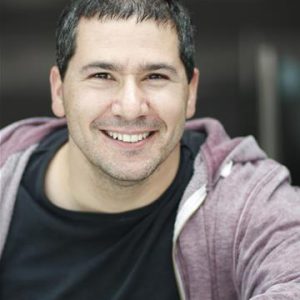 Gabriel Horn is a professional actor and award-winning filmmaker, best known for his lead-roles in the films Abdullah, Eva & Noah, his small but significant role in the cutting-edge Recast, and in his role as Judah in the series Green. Most recently, Gabriel acted in lead roles in short films that he wrote and in some cases, directed and won international recognition..

Gabriel completed his 3-years actors’ school in Tel-Aviv in 2012, and has been acting in films, series, commercials and theatre since. During his 3-year stay in London he played the lead role (Abdullah) in the film Abdullah (2014), directed by Evrim Ersoy, a film that won international recognition in the international festival circuit, including it’s premier at the London frightfest.

Another role for which Gabriel is known is that of Sebastian, the sinister dramatic boyfriend in Richard Hajdu’s feature film Eva and Noah (based on a true story); the film appeared in London and in film festivals.

Gabriel’s theatrical performances in London included the role of Cyril in the production of The Forgotten Million’s, as well as the role of the refugee, Stefan, in Histra: Stories From the Easter Block, a unique cinematical-visual theatre production that performed at the Platform Theatre in London, produced by Ferodo Bridges.

Upon returning to Tel-Aviv some of Gabriel’s more noticeable acting projects included Recast – an ambitious and pioneering project by CEO Liran Rosenfed and director Yaniv Tal, which allows for actors merging scenes from Hollywood blockbusters to allow them to showcase their own abilities.

Gabriel also plays the role of Judas, an important recurring character in the new webseries Green. This series has the unique concept of taking into account viewers’ choice in filming and producing the following episodes, with a steadily growing viewership and increasing options for television networks.

Gabriel has acted in commercials TV pilot teasers, promos, music videos and short films in both the UK and in Israel, and has voice representation in the US, as well as acting agents in London and in Israel.

Gabriel’s debut as a screenwriter and director was successful, with his first short film Do No Harm, in which he played a lead role, winning Best International Drama at the Linear International Film Festival in England (2019), and the second film he wrote and starred in, Mordechai (2019) selected as a finalist at the Near Nazareth Festival in December 2019, Thou (2019 – Semi-Finalist At AltFilm Festival, Toronto, 2020), Letter to My Brother (2019) and other short films, as well as significant acting roles in other short films (such as Patrick Florian’s THE BAR RAIDER).

Ami visits his severely ill brother, Lavi in hospital. Ami barely notices the negligence his brother continuously suffers. Later that night Lavi is no longer there, and Ami is left with a choice as to how to deal with his brother's legacy...

The Boy Who Couldn’t Feel Pain

As I Watch You From Afar