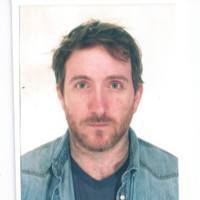 As a lad, Morgan lived in a small country town in outback Australia ~ and even though late fines were steep, he was frequently found at the local video store, pouring over everything from Braveheart to Breathless, Tora! Tora! Tora! to Titanic.

When he was 13 he snuck into a screening of A Clockwork Orange at the Valhalla Cinemas in Glebe, Sydney ~ at that moment he knew that he had to make films.

He studied film at Melbourne University, then moved to Sydney to begin working in the industry. He was drawn to Writing & Directing, and made his way through the biz, working on countless gigs, from Music Videos and Commercials to Feature Films. During this time, he made numerous shorts, which screened at festivals including Tropfest and the Next Wave Festival. He then jumped at the opportunity to be Claire McCarthy’s Director’s Attachment on The Waiting City (2009). Unfortunately, the GFC happened and the attachment didn’t.

After a hiatus to open a small bar, travel, and “find himself” ~ Morgan returned to complete a Masters Degree at Griffith Film School in Brisbane. There, he wrote and directed the short Disabused (2016), which won the Australian Directors Guild award for Best Direction in a Student Film. He was then selected to write and direct the Griffith Film School backed, half-hour short Rider (2017) as part of a 3 chapter feature film co-production with the Beijing Film Academy and Dankook Film School in Seoul, South Korea. On The Move (2018) premiered at the 2018 Beijing International Film Festival, and had it’s Australian premiere at the 2018 Brisbane International Film Festival. Rider premiered at the Cannes 2019 Short Film Corner.

Morgan is currently developing a number of film and television projects in both the fictional and documentary world. Making fashion videos to feed his hungry child and pining for simpler times.

After returning to his home town and church, Vince embarks of a dangerous downward spiral of redemption and revenge. As he reawakens the past, he not only comes face to face with his own sins, but also confronts the man who stood by and did nothing.