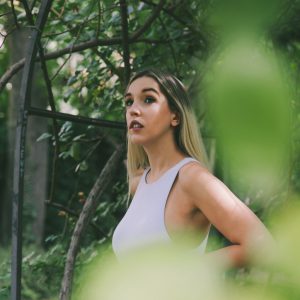 Hi. My name is Alba Pino and I’m a film director, screenwriter and producer. Every time I introduce myself like this to someone I don’t know, the conversation stops for a long second: ‘Wow! Film director. Really?’, ‘You must have money’, ‘Do you know any famous people?’ or the most recurrent ‘Have you done any series or films I’ve seen?’ The answer is yes, I work as a director, but I haven’t signed with Netflix yet, nor do I have any films or series in my filmography, but I have done many things and I have a lot to say.

After doing Audiovisual Communication in Santiago, I came to Madrid, because I was told that cinema was made here. So I moved to a ground floor in Argüelles and signed up in film directing at the Instituto del Cine de Madrid.

After two years of training, I graduated, created my production company Galimatazo with a friend from school and with that came my first professional projects. ‘Reverso’ was born and soon after ‘Libélulas’ was born too, a short film that has given me a lot of joy and that could fly all over the world, from the United States to India. After that, nothing happened.

Few people live from being film directors and studying stage was over, so it was time to work, even if it was not my profession. I started to work as a producer in various companies, such as ALCINE, Alfa Zulu, Smiz and Pixel, Estudio V or Dada Films & Entertainment. Currently, my production part is still active and I continue to collaborate with several companies, raising audiovisual projects.

At the same time, while I was earning my bread producing, new joys were emerging such as ‘Madrid, Madrid, Madrid’ or ‘Micro’, which won the awards for best micro-video and best short film at the FILM MADRID awards. After that I thought about going further and wrote ‘Clara’.

‘Clara’ was my most ambitious project ever and it involved a lot of money. Money that I didn’t have, but it didn’t stop anything. With the support of my usual director of photography, Sheila Rodríguez, we began to send projects to spanish cinema festivals, such as ‘Y Amén’, ‘A mi manera’ or ‘Alicia’, until we won award at the Almería Festival for ‘Noviembre, 1998’, which allowed us, along with a crowdfunding campaign and our own investment, to finance the short film. It was the most exhausting and satisfying experience of my life. ‘Clara’ will always be my favourite film because of what it cost and meant.

And we got to the present day. ‘Clara’ continues to fly around festivals and bring us a lot of joy. In addition, I have given conferences about my career at the Cineteca in Madrid to inspire others like me, I have given talks at universities about cinema, I am about to publish a book entitled ‘At least it’s not raining’, which talks about cinema and me; and I always have several films, new short films and new stories waiting to be realized. With a six-year career, a few awards on the shelf and a few scripts under my arm, I don’t give up.

As they said in The Matrix, ‘There is a big difference between knowing the path and walking the path.’ And believe me, I go barefoot anywhere.

Clara is me. It's also you and maybe your neighbor, the girl you live with or the one who sits next to you on the subway. Clara is many people and in the end it is only her. Clara is the story of a life, of a night, of a bad feeling, of that lonely s

Alba is currently working on her feature debut film: “The empty beach”.