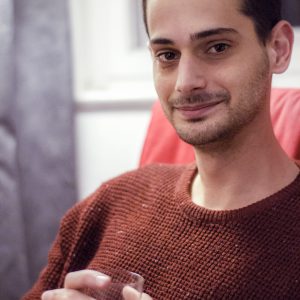 Amir Ovadia Steklov is a Berlin based Israeli filmmaker. His films are dealing with topics of: Racism, LGBTQIA and immigration within a sex-positive framework.

Amir graduated from Sam-Spiegel Film School in 2013 and worked as an independent film editor and animator since then. He is also part of a growing movement of queer-activists-filmmakers in Berlin Germany.

Amir is best known for his award-winning films “Don’t Be a DICK!” and “Between Two Walls”.

DOWNLOAD PRESSKIT
My Vision
Capturing dreams of moving images and sounds from a deep places within our souls.
Additional Information

Amir Ovadia Steklov was born in 1987 in Jerusalem, Israel. His passion for films and animation began at a very young age. At six years old, Amir was already experimenting with moving images and stop motion animation. At age nineteen, with no previous formal education, he created a 20 FPS stop motion film with dynamics and character, his first short animation Fireworks (2006). The film was screened at the Tel Aviv Museum of Art, and Amir’s advanced technique and artistry were received with much wonder and appreciation.
This project led to Amir’s enrollment in one of the most renowned and exclusive film-directing programs in Israel, at the Sam Spiegel Film Academy – Jerusalem. During his years in film academy, Amir’s style began taking shape. With strong influences that ranged from David Lynch, Japanese animations, to underground independent films, Amir was standing out in his class with a mature cinematic voice and adventurous visual visions.
After film academy, Amir was running the Jerusalem Animation Studio, a post production and animation workshop, and was working with major clients such as the Israel Festival, Eilat Chamber Music Festival, On-Stage and many others. Meanwhile, he was teaching Stop-Motion Animation at the Jerusalem Open House, a community center for LGBTQIA. After two years of running his own studio, Amir was hired by Channel 10 News to work as a senior video editor, working closely with some of the most influential people in the industry. Meanwhile He was also directing and editing a few music videos for the musicians ‘Simulakra’ and ‘Rafael Azran’.
In July 2015, after two years of intensive and successful news editing, Amir moved to Berlin, Germany. The reasons were mixed: as filmmaker, he felt an urge to further explore creative realms and to discover new horizons, inspiration and stimulation. Politically, he reached a point of extreme disagreement and criticism of Israeli policies, particularly regarding the occupied areas. In Berlin he found the focus and the support for expressing his political views in his cinematic activity.
Slowly but surely, Amir found his circle of film-makers, friends and colleagues, focusing mostly on independent, queer, activist short films. He named his new studio The Glass Prince—a literal translation of his name from Arabic and Russian. He has been working closely with fellow film makers such as Popo Fan, Pina Brutal, Ines Moldavsky, Kobi Or-Cohen and others. He also offers post production solutions such as video editing and animation, working recently on a successful Israeli sitcom called Aba Metapelet (Hebrew: Father-Nanny) for the TV-Channel TeenNick.
Meanwhile, Amir was also working as a professional stills photographer in the food, tourism and event industries, providing photography service to major clients such as Prism – Michelin star restaurant in Berlin, Chatbot Summit, Schneeeule, and many others. His artistic visual works include street photography, landscapes, infrared and astrophotography, as well as urban time-lapses. Those works are exhibited in a few local galleries and cafes in Berlin and featured on Ynet.co.il, the most popular Israeli news website.
Amir’s Berlin debut was his 2019 short film Between Two Walls that won the Best Animated Short award at the Berlin independent Film Festival 2020. His upcoming full-length film The New Jews is a development and expansion of this short film. The film threads together the topics immigration, post-Zionists Jewishness, collective memories, racism and sexual communications; it’s Amir’s most personal and most comprehensive film thus far.
Amir’s films and animations are participating in festivals around the world, and during the Covid-19 Pandemic, Amir has been focusing on creating cinematic content (Shorts, Animations, Documentaries, comedies) and maturing as a film maker.

Short documentary that explores the complexities of being a political Jewish immigrant in Berlin Germany nowadays. Through interviews, phone calls, and chatting on dating websites, the movie portraits the conflicts young Jewish people have in Berlin

The Short Nights of Berlin