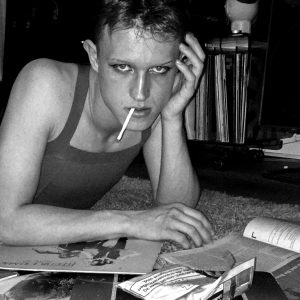 With the age of 10 they became obsessive with the art of film and studied film history and theory on a daily basis. Never having set foot on a professional film set, they started developing their own concepts of audiovisual storytelling, always searching for new methods.

In the spring of 2020 Linus worked for the opera festival Immling for two years as co-director, director’s assistant, evening director, stage manager and light director for productions such as “Madama Butterfly”, “La Verità in Cimento” and “La Cenerentola”. A few months later they moved to Athens to support political organizations. When they returned to Germany, they started shooting his first shorts, all financed by themself and with the goal to always keep the crew as small as possible.

Linus identifies as non-binary and lives in Vienna.

My Vision
I neither try to mirror reality in my films, nor to create an alternative one; I simply want to create a time and place where reality can be reflected, without being bored by its limitations.
My Website

A train station in the middle of nowhere. A young woman from the Radical Left is waiting for a train, as an unknown man in cowboy clothes appears. Here, where society ends, law and order will become an arbitrary power...