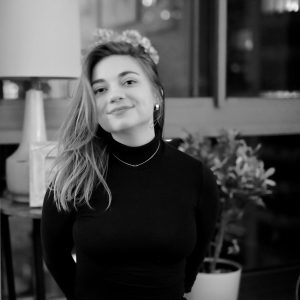 Emily is a writer, director, and producer from Manhattan Beach, California. Her first exposure to the film industry was at 9 years old as a child actress. Emily studied American History at Dartmouth College where she developed her love for sharp humor on the university’s improv comedy team. After graduation, Emily worked as an Associate Producer on documentary films that premiered on Netflix, AMC/Sundance Channel, and PBS. Currently, Emily’s pursuing her MFA in Screenwriting & Directing at Columbia University. Emily’s female, queer, and Jewish identities are at the forefront of her story-telling.

My Vision
Emily 's work blends humor and heart to explore character's discovery of themselves through unpredictable challenges.
My Website

A corporate consultant by day and a drag queen by night, Jebreel’s worlds collide as he prepares for a show and must answer to his demanding boss. A Columbia University short film about the collapse of the private and public during the COVID-19 Pande