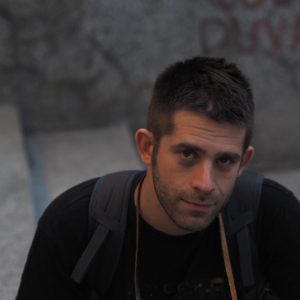 After having studied Philosophy and Cinema at Lyon’s universities and in Italy, Kevin goes back to live in Italy, and then in North Macedonia, where he shoots his first short movie.

Some of his scripts are noticed in different contests in France (Grenoble Film Festival or la Maison des Scénaristes, amongst others).

In 2019, to improve his skills, he follows a training course on scriptwriting with Jean-Marie Roth.

He also shoots several independent short movies : some fictions and an experimental fiction.

Kevin is now focusing on some documentary projects.

One of them is around right to abortion in Poland, huge protests, apostasies, signs of the country’s deep division in the urban landscape, a hateful truck driving around in Warsaw, and… being a young woman in this country.

Four people at a bus stop. They wait... Together but alone. So close and so far. Buses are passing ; a book is circulating.

Tribute to a vision (Italy/Slovenia)