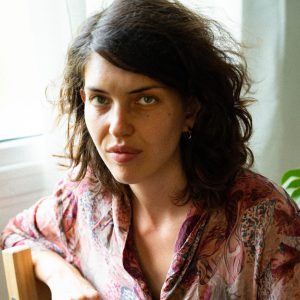 Hila was born in 1988 in Saint Petersburg, Russia, and immigrated to Israel with her parents in 1990.  She graduated from the Sam Spiegel film school in Jerusalem in 2019 where she studied film directing. Her latest Independent short film, “Motherland”, was produced in collaboration with the “Desert Shorts” project, a short film program of the Arava Film Festival. Her graduate film, “Cold frost & Sunshine”, won 1st place at the Moscow VGIK International Film Festival in 2021, and also won Israel’s Film Critic’s Forum Award in 2020.  She’s received her BA in Theater, Communications, and Journalism from the Hebrew University in Jerusalem.  She’s currently working on her first TV series and full-length feature film.

The film deals with issues of migration and foreignness. The main motif I chose to work with was the constant noise, the inability to hear, and the effort required to speak and to be understood. That’s why I chose to shoot in a quarry.

In this film, I’m focusing on a relationship between two foreign and lonely female characters, set against an overtly masculine world.

This is my 3rd film working with the actress Svetlana Demidov. This time we were joined by Lena Fraifeld, and together they created a tough yet emotional world, both within the film’s storyline and within the cinematic world in which all three of us work.

Masha, a young Russian immigrant, dealing with a life-altering crisis, seeks out her mother, Vera, at a quarry where she's employed. She is sucked into Vera’s new life alongside a group of homeless quarry workers.