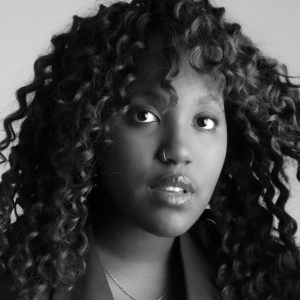 Laura Kamugisha is a filmmaker of Congo-Rwandan origin based in Montreal in Canada. Her films explore notions of cultural identity, memories and intergenerational baggage all through visual poetry. She has a bachelor’s degree in Film production at Concordia University and would describe her projects – and herself, as sensitive, stubborn and intuitive. Her works have been presented at various festivals throughout Quebec and internationally, including the Festival Nouveau Cinéma (FNC), the Montreal International Documentary Festival (RIDM) and Arica Nativa Film Festival. She is currently working on two short fiction films while interning at Midi La Nuit, the double Academy Award nominated production company, founded by Annick Blanc and Maria Gracia Turgeon.

Poetic and experimental, Mitochondrial connects, through an auditory allegory, black women and the mitochondrial, the powerhouse of our cells.

When You Hear The Divine Call