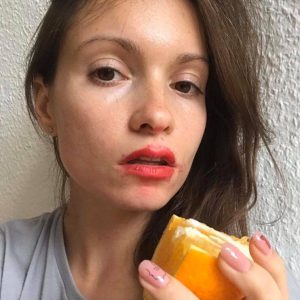 Aleksandra (Sasha) Sëmkina was born in 1988 in Moscow. Growing up as a rebel, she was the only kid to be allowed to not sleep during quiet hours in a kindergarten and, much later, to not wear a uniform at school.

She studied journalism and started her career in marketing when still in university for which she was almost expelled. The sacrifice was worth it as by 23 years she was hired by the Moscow office of FOX International Channels and National Geographic Channel where she worked for almost 7 years. 12 years of PR and marketing career and running a small business with a friend still didn’t promise a bright future in her country. Active and passionate for justice, Aleksandra started looking for an opportunity to leave Russia.

Being a passionate film fan, Aleksandra kept visiting not only series sets for work but also the Berlinale film festival for leisure. Berlin was love at first sight so it was only a matter of time to move there.

In 2019 Aleksandra finally made her life-long dream come true, moved to Berlin, and joined a film school. Now a graduate she is willing to tell stories with great attention to delicate details unfolding layers after layers in human relations.

A fragile story of a beginning of a friendship between Matvey, who recently immigrated to Berlin, and Beate, a free-spirited local.

I Must Be Going