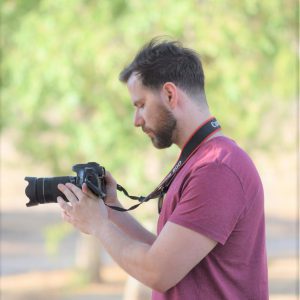 Started my artistic journey as a curious child who likes to explore reality, tried various platforms of art and got hooked into the musical world, playing saxophone since 1997, educated in Kfar Sava Conservatory of Music, playing in wind bands, orchestras and groups.

In recent years I began composing my own music and teaching saxophone, meanwhile infusing my love for Cinema as part of my passion and love for Art. This led me to take courses in Cinematography in “Beit-Berl” College Academy (2016) and opened my artistic horizons to photography and film direction.

In 2017-2018 I studied film direction\production in “Hasifa” School of New Media, and produced\directed my first Short Film “Healing” at 2019, in almost a year long process. The film was based on my own written script, inspired by my love for psychological and reality twisting genres of films. It was post-produced not only for the visual vision of my screenplay, but non less for the audio\musical and sound nuanced approach I crafted carefully.

Now days the film has been sent applications for the participation in several short films festival worldwide.

Currently, I am constantly developing and writing new ideas of scripts for future productions and hoping to continue my expansion of love to the world of Cinematography, fulfilling visions and perfecting my photography\video skills.

On a summer night, Itay (30) searches for his disappeared dog on the outskirts of town area. A 'random' encounter with a 10-year-old boy, whose dog ran away, leads them to a joint search. Will the search lead them to find other commonalities?