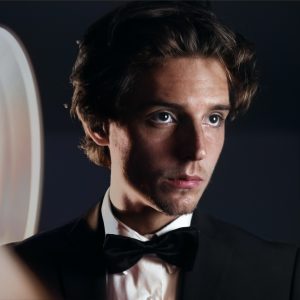 In the Business for more than ten years, he worked with some well-known international Companies and Celebrities. In 2021 he shifted his focus and is now producing mainly feature films with the CAMELION FILMS COLLECTIVE. In order to finance the increasingly budgeted productions, he still does commercial projects every now and then, usually for high-budget business customers as he has made himself quite a name in the local industry.

As of September 2022, he is co-producing his so far longest movie, running over 30 min. “Her Last Coup” or in German “Ihr letzter Coup” is a clever Heist-Movie with the highest expectation of production quality yet. As Director of Photography, Philip is deeply involved in the Pre-Production Process, working tight with the Director and Art Director to create a mutual visual interpretation of the Script and then plan every Shot in every Scene, making sure the execution on set works smoothly in regards to cinematography and lighting setup.

Five art enthusiasts meet in a studio for a weekly painting class. But the peaceful work does not last long, because the young model Lucia is confronted with the diverse airs and graces of the five very unequal amateur painters.