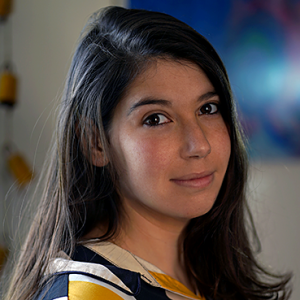 Shulamit’s first year student film “Miriam” won an honorable mention in the Sir Jack Lyons Charitable Trust Award and was afterwards screened at the Toronto Jewish Film Festival. Since then, it has been screened at many festivals worldwide..

In 2019, Shulamit’s second-year film “Noa” won the Jerusalem Film Fund and the Sir Jack Lyons Charitable Trust Award for best short film. It was later accepted to the Jewish film festival in Toronto (TJFF) and has since been screened at many film festivals worldwide. “Girl No. 60427,” a  mixed drama/animation film, is Shulamit’s graduating project. Shulamit also holds a bachelor’s degree in History and Education from Bar Ilan University.

I am a third-generation to Holocaust survivors on all sides. My parents tried to protect us and make sure we had a normal childhood, but despite all the efforts, the Holocaust was present in our lives, all the time, everywhere.

Grandma did not talk much, but she did write, to herself. In 1946, after her liberation from Auschwitz, she sat in a DP camp in Italy and wrote what she went through during the war in a small notebook. Grandma wrote these things to unload the difficult experiences she went through. Perhaps she was afraid she would forget. She hid the notebook, and we were not allowed to read it.

In the first version of the script, I thought it would be a documentary about my family and the notebook. But during the writing, it became clear that the real story here is actually the special connection created between the third and first generations. I did not change any details in Grandma’s notebook; the Holocaust story in the film is faithful to the original.

Tel Aviv, 1998, summer vacation. Reut finds Grandma's secret notebook from the Holocaust. Grandma's story resonates in Reut's well-developed imagination, and the fun week in Tel Aviv with Grandpa and Grandma turns into something else entirely.

Between Me and Us