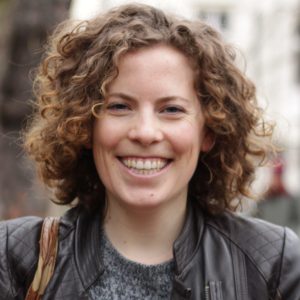 Nicole Jachmann (1987) was born in Southern Limburg, as the fourth child after three boys. Only at the age of 11, it became clear to her that there was a difference between her and her brothers. Although at first she thought that being a woman meant that she had to give up privileges and was not allowed to cycle through the dark alone, after puberty she could appreciate it more and more and see the benefits of it. Together with her brothers she experienced all kinds of adventures, often partly in an imaginary world. Actually, making films is an excuse to get back in touch with her inner child. It is a way to create new worlds and give free rein to her imagination. With her films Nicole wants others to be part of those worlds.

As a thesis for her journalism studies, Nicole made the short documentary Serving in Silence (2011) together with a fellow student. For her second study Liberal Arts and Sciences, Nicole studied a semester at the Claremont colleges in California. Here she followed a number of subjects in film. When she received a scholarship for an advanced course, Nicole moved to Berlin to follow a course in screenwriting there. It was here that her love for film was definitively sealed. With the film De Hemelpoort (Heaven’s Gate, 2015), a script she had written came to life for the first time. Since then, Nicole has worked as a fixer, PA, scriptwriter and director’s assistant on various programmes and short films. Schaduwjager (Shadow Hunter, 2018) was her debut film as a director. Through workshops and masterclasses she quickly learned more, in 2018 she also joined Cinesud’s Talents to Cannes training programme. Although there are many different themes that interest her, gender is often reflected in her work. With the short film Funkele she wants to sketch a realistic portrait of female sexuality. At the moment Nicole is working on her new short film (working title Emma) and on the script for her first feature film ‘Het deel van de dag dat jij er niet bent’.

Fifteen-year-old Robin and her best friend Merel share everything and are inseparable. Except for Robin's budding sexuality and curiosity. Robin is ashamed of this and keeps it anxiously hidden.

THE DOOR OF RETURN