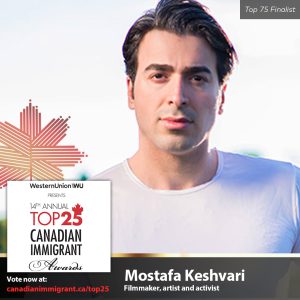 Mostafa Keshvari is an award-winning Iranian-born Canadian Writer, Director, and Producer based in Vancouver. He was named as the “Top 25 Canadian Immigrants” in 2022 for his film contribution to equality and inclusion.  Mostafa has over 80 IMDb awards including a Golden Sheaf Award,  5 Leo nominations, and 4 Cannes Film Festival short corner selections. His films mainly explore social issues and diversity, and have been featured in The NY Times, Hollywood Reporter, The Guardian, TIMES, BBC, CBC, etc. His last feature CORONA on Xenophobia was acclaimed as the world’s first COVID-19 film. As the president of BC Minorities for Film and TV Society, Mostafa is also a member of DGC’s BIPOC committee where he advocates for diversity and inclusion in the film industry.

An Inuit boy lives on the last melting igloo due to global warming. He struggles to survive by fishing empty tuna cans and plastic bottles in the polluted North Pole.