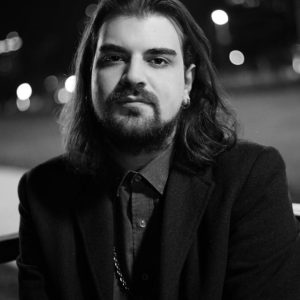 Julián Córdoba is a director and screenwriter born in Buenos Aires, Argentina. He graduated from the Cinematographic Research Center (CIC) and continued his professional education at the National Experimentation Filmmaking School (ENERC) in his home country. During his student years he worked as a film critic, publishing on “A Sala Llena”, a film reviews and industry analysis site.

After receiving the Best Film award at the Buenos Aires City Annual Arts Competition for his thesis project “Cas Fortuit”, he moved to Paris, France. In 2021, back in Argentina, he completed his short film “Las Bestias”. His films address themes of alienation, social collapse and violence, exploring the boundaries between individual responsibility and collective guilt.

Julián is currently working on his new short film project, “Flashmob”. He is also developing his first feature film, “Border”, under the mentorship of Celina Murga, acclaimed filmmaker and Rolex Protégée selected by Martin Scorsese.

As a filmmaker, I’m always interested in looking for inspiration in those questions that haunt me day and night. Violent behaviors fascinate me, probably because I find myself on the opposite side of the spectrum. It’s something that terrifies me, but I feel connected to it on a human level… Is it a latent condition of our nature?

When I returned home after living in France for almost two years, I found myself completely overwhelmed by an increasingly volatile socio-political reality. In a semi unconscious act, and naturally conditioned by the impact of my return, I began to delve into the history of Argentina and its close bond with violence; a relationship that I conceive as trapped in time. This urgency to explore the past in order to understand more clearly the current tensions, became the origin of “Las Bestias”.

I think the past is not only the cause, but also a reflection of what modern Argentine society has been living for decades: repressive environments, with notorious social inequalities, where hate speech is promoted with total impunity as if its consequences were non-existent.

It’s true that this context was the starting point, but the intra-family relationship was there from the beginning. That’s the emotional core and that’s where the whole story lies, in those characters and their lives portrayed as a suffocating microcosm. That’s why I wanted the main characters to have the extreme need to escape, to the point of leaving body and soul in the attempt. But maybe there are things we can’t hide from. Those things that are presented to us as incomprehensible forces: our history, our roots, our desires, our fears…