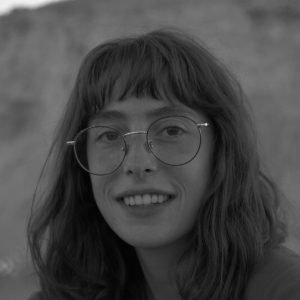 Born in Tel Aviv, Israel, on 8.4.92. From 2009 – 2010 she studied cinema and literature in ”Hadarim high school” and worked at many film sets. From 2014 – 2019 she was a student in “Minshar school of art” in Tel Aviv. Since 2014 she is working as a freelancer editor. Most of her films she writes are about her family and in which she plays along with her real family members. Her first short film, at the third year in “Minshar” (2019), was “Fine” which participated in many festivals around the world. Like Warsaw Film Festival, Filmschoolfest Munich- prized for the “most original film” + ” the audience’s favorite”, and was nominated as a member of the jury the year after. Her second short film in 2020, “As You Like”, was sponsored by “Rabinovich Foundation” and was premiered at “Show Me Shorts Film Festival”, New Zealand. In 2021 she directed and wrote the short film “Killing ourselves”, sponsored by “Gesher Film Foundation” and is going to be premiered at “Arava International Film Festival”. In addition, during her studies she produced a number of films for her classmates and made some more short and experimental films, which won prizes. Today she is filming a short film “Khachapuri Tutorial”, sponsored by “The New Fund for Cinema and TV” and writing her feature film.

A father, a mother, and two daughters are in an idyllic setting at home, each doing his own thing. The moment is disrupted when dad comes up with a fun, spontaneous suggestion: to go to a restaurant together in Rosh Pina.