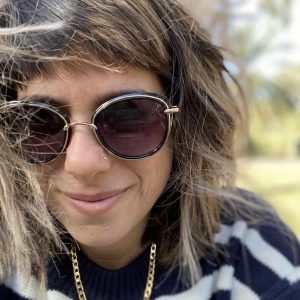 Studied at the school of arts in the acting department for 9 years, but In High school she got the “filmmaking fever” and decided there’s nothing she wants to do in life more than making films.

Between 2008-2013 studied filmmaking in Tel Aviv University and directed two fiction short films and one short documentary. After she graduated she made two short independent films. Her shorts were screened and won awards worldwide.

Lives with her spouse Moshe Mishali who is a film & TV drama director of photography, and a mother to sweet little Eithan.

A Morning At The Museum // Gesher Film Fund

When Assaf's wife drags him to a museum, the place that never changes, he could not help wondering how they have changed . A chance encounter with a lovely tourist, prompts him to choose between a perfect stranger and the wife he knows.