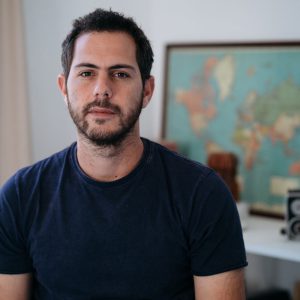 Born, raised, and educated in the community village of Nofit, in northern Israel.

Graduate of the Steve Tisch School of Film and Television, Tel Aviv University.

Aside from his work as a director, he also works as a cinematographer for short films and various television productions.
Director of “Pool” (live-action short, 2019) and “Horah” (documentary short, 2018), Both featured and won several prizes in film festivals worldwide.

Director of “Uzzi” (documentary short, 2018), which was shortlisted for Bafta’s student awards.
His latest film, “Requiem for a Whale” (Short Documentary, 2022), won second place and the Cinematography award in the student competition of the Docaviv, Tel-Aviv international documentary Film Festival 2022.

At the age of 94, Prof. Uzi Ornan continuing his lifelong ongoing struggles for upholding the Secular and Democratic image of the State of Israel with his last endeavor to establish and secure Civil Burial rights where he lives.

The Unicorn in Snowpants Suddenly Ran Off