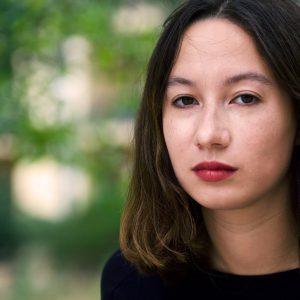 CLARA ZOE MY-LINH VON ARNIM was born in 1994 in Munich. She was a member of the youth ensemble of the Münchner Kammerspiele. Since 2015, she has been studying Directing at the German Film and Television Academy Berlin (DFFB). She has worked as an assistant director on films like Oliver Stone’s Snowden and Gore Verbinski’s A Cure For Wellness, and several other theatrical film and Netflix productions. Her short films include GLOBSTER (2018), MOTTEN (2018), RUSHES (2019), WALLFAHRT (2019) and EXCALIBUR CITY (2019).

Early morning in the Bavarian woods. Christoph, suffering from a severe hang-over, sits next to his mother on a hunting perch. While she is aiming at a deer, Christoph tries to come out to her, but this really doesn’t seem like the best time.

Girl With a Fork in a World of Soup // Beit Berl